The 6 Most Common Types of Intrusive Thoughts

Intrusive thoughts are words or images that pop into your mind unwanted. And while intrusive thoughts can be really uncomfortable, you’re going to learn that they don’t mean anything about you.

A lot of people are afraid that they’re broken or disgusting if they have an intrusive thought. Like, check out this comment from the student in the Intrusive Thoughts course where Dr. Kat Green is the instructor:

“When Kat stated specific intrusive thought examples, I sobbed because there are some I’ve told my therapist and some I thought were too bad to even speak aloud. I was never sure if people were just placating me when saying that these thoughts are normal, but to have someone stating examples really made me believe that for the first time. For the first time since I’ve started having intrusive thoughts, I feel like I’m normal and there is hope.”

So when I read this piece of feedback, I knew that I needed to make a YouTube video because there are probably a lot of people out there who feel the same way as this student, people who secretly fear that they are terrible human beings for having disturbing thoughts. But that is just not the case.

So let’s talk about the six most common types of intrusive thoughts and what you can do about them.

What Are Intrusive Thoughts?

What are intrusive thoughts?

Intrusive thoughts are words or images that pop into your mind unwanted. They’re often disturbing. They have little to do with what you’re doing or with reality. And the thoughts that are distressing can seem really loud, demanding your attention.

Even when other people tell you that a thought isn’t true or it doesn’t mean anything, the thought may feel so disgusting that it’s hard to believe them. And these thoughts might make you wonder if you’re secretly a terrible person. Maybe you think that if they really knew how dark your thoughts were they’d be horrified.

And while intrusive thoughts can be really uncomfortable, you’re going to learn that they don’t mean anything about you.

What Are the 6 Most Common Intrusive Thoughts?

Number one: thoughts of self-harm.

With intrusive thoughts, you don’t want to hurt yourself. The thought frightens you. But if the thought keeps coming back, it can be quite distressing.

2. Intrusive Thoughts of Harming Others

Number two: thoughts of harming others.

Thoughts like you might hurt the baby or drop the baby are actually super common. Nearly half of new parents experience fearful thoughts about hurting a baby.

Now, again, you don’t want to hurt someone. You get no pleasure from these thoughts. They scare you, but the thoughts keep coming back.

These include fear of doing a sexual acts with a child, fears that you have or that you will touch someone inappropriately, visualizing someone naked, and fearful thoughts about gender or sexual identity.

For example, persistent thoughts of being gay despite being straight.

These are thoughts like, “What if I committed a sin?” “What if I’m not 100% honest?” “What if I break this religious rule?” This subset of OCD is called scrupulosity.

These are what-ifs. For example, “What if I’m actually not good at my job?” “What if I made a mistake?”

This is fear of doing something embarrassing, like shouting a profanity in a quiet church service.

It’s thoughts of, like, “What if I cheat on my spouse?” “What if I don’t actually love my wife, even though she means the world to me?”

Now, there is a seventh category which I’m grouping separately, and these are unwanted thoughts of past trauma. And these include bad memories and flashbacks. These are connected more to actual events and PTSD than to just random thoughts, so that’s why they’re in their own category.

What Can You Do About Intrusive Thoughts?

So those are the six most common intrusive thoughts that people have. So now let’s just talk briefly about what you can do about them.

So when it comes to intrusive thoughts, the first thing to remember is that having them doesn’t mean anything about you. Again, most people have intrusive and unwanted thoughts. The difference with OCD is how you react to them.

Researchers studied 777 college students in 13 countries and found that 94 of them had experienced unwanted or intrusive thoughts in the last three months. So having these thoughts doesn’t mean there’s something wrong with you.

But the way the brain works, whatever we give attention to the brain makes louder. So those fearful attempts to control those thoughts just makes them feel stronger and stronger.

Having a thought doesn’t mean you’ll act on it. Therapists who specialize in OCD treatment spend much of their day doing exposure therapy with clients. So they’ll take a client who has the thought like, “What if I push someone down the stairs?” and they’ll take that client to a stairway, and they’ll stand with their back to the client. And, you know, the thought probably pops up, but then no action is taken.

Or they’ll hand knives to someone with thoughts of cutting someone.

By the way, I am not necessarily saying that you should try exposure therapy on your own. If you’re experiencing OCD or anxiety, of course I recommend working with a licensed professional who knows how to use exposure therapy.

But this process works. Exposure response prevention. It’s uncomfortable at first. Your anxiety will go up. But then your brain will learn that the thoughts aren’t actually dangerous, and they’ll diminish over time.

Just because you think something doesn’t mean it’s true, and it doesn’t mean you’ll act on it, especially if it’s a distressing thought for you. There’s a big difference between dwelling on a thought because you relish it and having a thought pop in over and over because you’re scared of it.

The second thing to do with intrusive thoughts is just to learn to stop feeding them. Carl Jung said, “What you resist not only persists but will grow in size.”

So people with a healthy reaction to random thoughts, they’ll just have a weird thought and they’ll go, “Oh, that was weird,” and then they’ll move on. But when we try to resist or suppress or control or avoid thoughts or act on them or believe the thoughts mean something, that’s when the thoughts get louder and stickier.

So you can actually learn the skill to separate yourself from your thoughts, to notice them and let them pass by.

Now, I really like ACT’s strategies to learn how to do this. So this includes skills like cognitive defusion, mindfulness, and willingness. And Dr Green goes into depth in all of these strategies in her course, Taking Charge of Intrusive Thoughts. So you can actually learn how to do that there.

If you’re interested in learning more about her course, you can check out the link below.

Thank you for reading, and take care. 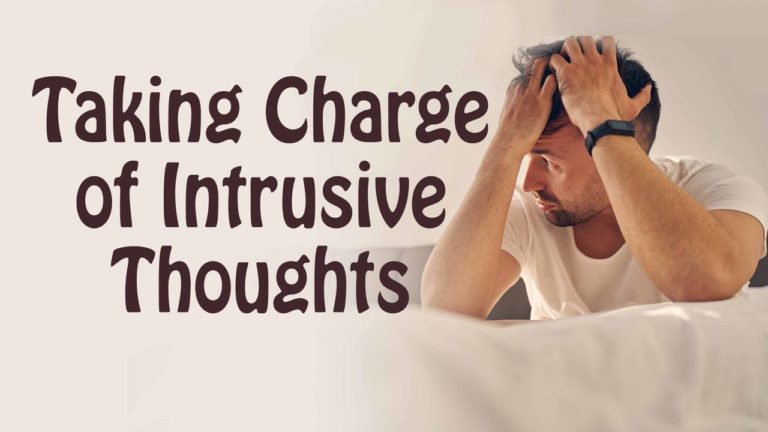 Click Here to Learn More
PrevPreviousDepression Is Not Caused by a Chemical Imbalance
NextHow to Deal with Anxiety at Night: 2 Essential SkillsNext