Share on facebook
Share on linkedin
Share on twitter
Share on email
Last night I cautiously decided to open Facebook, as it has been a not-super-positive place this last year, and I saw two uplifting posts: one about how to use chicken poop as fertilizer in the garden, and then this one by my brother. He’s generally pretty quiet on social media and otherwise. I asked his permission to share and he said yes, in the hopes that it might help someone.
For context, Kevin was a boy who lived next door. His mother was severely mentally ill and abusive. Natalie, my brother’s wife, and Chris, my brother, took the boy in, eventually fostering him in their home for years while his biological mother was in and out of hospitals and treatment. After a few years, she stabilized somewhat and the system regranted her custody. Kevin asked to go live with her again, and they moved far away. One day they got the terrible news that Kevin had died by suicide.
This is what my brother wrote. I’m grateful to him for his vulnerability in hopes of helping someone.
-Emma

My Brother's Story of Losing a Child to Suicide

I’ve been debating whether to post this all day. I wrote it last night as I thought about today. It is very personal. I was about to post it when I saw the news about the situation in the capitol today. That made me debate again whether now is that he right time, but I guess the reality is that there is no right time, so here it goes…

Four years ago today, Natalie and I lost a child to suicide. He wasn’t living with us at the time; he was back with his mom. He was not our biological child, but he was a part of our family and had lived in our home as one of our kids. Our kids thought of him as a brother, and Natalie and I thought of him as one of our family. He was only 11 years old at the time.
One of the hardest things I have ever done is walk into our home with Natalie and try and explain to our kids what had happened. I don’t think I’ll ever be able to understand what it was that led him to choose to end his life. Kevin’s time with us impacted me and my family in so many ways, and his death continues to impact me.
After he died, Natalie wrote a beautiful tribute, searched through all our pictures of him, and put together beautiful remembrances. I think the catharsis of this helped her a lot. I know she still struggles, but I do think it brought her some closure.
Over the past four years, I’ve meant to write some thoughts down because it is one way I process things, but I’ve never been able to sum up the energy. Today I’m going to try. I don’t do this seeking pity. I do this for myself. I’m posting it here because I hope there may be others dealing with similar things who can find help from this.
Kevin was pure emotion. When angry, it was rage, but when happy, he was so full of joy. He had a huge smile. The first time I saw him, he and my oldest son were jumping up and down bumping into each other after getting off the school bus. They were giggling, laughing, and there was so much energy.
One of my favorite memories of him was when he had joined us on vacation in Utah. We were in Logan Canyon, and he looked up at the surrounding mountains and wanted to hike up one of them. He was a really small kid who normally didn’t have much tolerance for exertion, but he and I, as well as several of our other kids, crossed a creek by climbing over it on some trees, then started hiking up the steep slope.
I thought he would turn around a few minutes into it, but he kept going and going. There was no trail; we were just heading straight up the slope. I finally had to turn him around to ensure we got down before it got dark. The whole way, even when he tripped and somersaulted down a rocky section, he was smiling, and several times later he talked about climbing that mountain with a light in his eyes.

After his death, I spent months in a fog. I took one day off work, then returned to work. This was a mistake, but I thought that getting back to work would help me.
I remember, my first day back, talking with one of my patients who had recurrence of cancer, now spread to the brain, and discussing the poor prognosis. I walked out of that room and wasn’t sure I could walk into the next one; my sadness was a weight around my neck. It took everything I had to not collapse in the hallway that day.
During residency, you learn how to “deal” with this. I had many experiences where I rushed to a patient’s room in the hospital, attempted heroic measures to save a life, then walked out and immediately had to move on, to care for someone else who was still living. I “turned on” that part of myself again and kept going.
Unfortunately, when you do this, it doesn’t take away the emotional toll of what you had to do — it just delays it until you find another time to deal with it.
At work, I spent many hours sitting at my desk in my office staring at nothing. At home, I picked up a complex woodworking project and spent countless hours in the garage by myself, not realizing that by doing so I was leaving Natalie to manage the home and the kids an inordinate amount of the time. This was my coping mechanism, but only later did I realize how unfair it was to Natalie.
Months passed while I waited for myself to feel okay. Finally, I sought help, and after some counseling sessions realized it was okay for me to not be okay. It was okay for me to be hurting. It was okay for me to not want to do anything. It was okay for me to not be who I was before Kevin’s death.
This didn’t take my pain away, but it did help me accept some parts of who I had become and allow me to start to take steps forward. It took me about one year until my ability to be productive really returned.
Each of my kids dealt with it differently. The younger ones didn’t really understand, but the oldest three struggled in different ways. I’m sure they still suffer and hurt inside.
When you lose someone you love to suicide, there are so many questions. Questions about what you could have done differently, how you could have prevented it.
I’ve wondered so many times about whether I could have done better for him when he lived with us. I’ve wondered if we failed him by not reaching out as often as we should have after he and his mom moved several hours away. I’ve wondered if something I did contributed to how he felt. I’ve sat at his gravesite and asked a thousand questions. There are no answers to these questions. That is part of the pain of a loss like this. 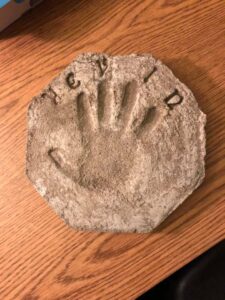 Sitting on my desk in my home is a cement paving stone with his handprint in it that he made at our family reunion when he was eight or nine years old. My sister sent this to me after he died.
His little handprint is my favorite memento, a reminder of some of the happy times we spent together. I often look at it while I work. With COVID, I’ve had more opportunity to work from home and stare at it in between tasks. When I stare at it, I remember Kevin and wonder how many other like him are out there and how I can help them.
In my work, I regularly talk with people who are very depressed, many of whom consider suicide. I myself have had times in my life of severe depression where hope was difficult to find. Often, I find these people are hanging on to one thing — a loved one, a pet, a friend, a family member — as their reason for not giving up. It is amazing the power of a loving connection.
During the COVID pandemic, I’ve seen an increase in the number of patients truly struggling, feeling alone, helpless, and hopeless. Our world is strange. At the same time that you can see what everyone you ever met is doing on social media, you can also feel isolated and without friends. Depression and anxiety amplify this. They make alone-ness a powerful, suffocating force.
Over the past four years since Kevin’s death, when I’ve had moments where I felt I could talk about my experience with this, I’ve often had others approach me and share similar experiences. I’ve found some peace in their experiences, and I think they may have found some peace in mine.
Shortly after Kevin died, I had a friend who had lost a brother to suicide take me out to lunch. I don’t remember anything we talked about, but I remember eating good wings and knowing I was understood, and that was powerful for me.
Over the years, I’ve wished I could be someone who takes a tragedy like this and uses it as an impetus to do something big — create a movement, develop new solutions, raise money to fund suicide prevention efforts, etc. Then reality hits and I put one foot in front of the other and move on with the next task I need to do for my family or my job. I’ve realized that as much as I want to be that person, that isn’t who I am.
But I am someone who can share my story, and I hope that by sharing my story, it may provide hope or comfort or understanding to at least one other person. Maybe my experience can help someone else recover from a similar loss. Maybe my heartache can make someone else comfortable to reach out to me when they need help.
So that is why I post this in such a public forum. I wrote it for myself, because on the day of his death, I need to remember Kevin and I need to process my feelings.
I have tried to do this countless times. I have about 10 different efforts in my phone and on my computer that I started, and could only write one or two sentences before I stopped, due to pain. It took me four years to get to where I could write about it. I post it in a public place because I know I am not alone in this struggle.
I miss you, Kevin.
PrevPreviousHow to Get Motivated and Stay Motivated
NextHow to Stop Worrying about the FutureNext