Cognitive dissonance is when we have a gap between what we believe is right and what we are doing. You can do all the coping and meditation and self-care you can handle, but if you don’t figure out cognitive dissonance, you’re not going to feel good. There is no substitute for integrity when it comes to peace of mind.

What Is Cognitive Dissonance?

In this post you’re going to learn about cognitive dissonance. Cognitive

dissonance is when we have a gap between what we believe is right and what we are doing, and so we create dissonance in our lives. This means that we believe one thing but are acting on something else.

Dissonance feels like having one foot on one boat and the other foot on another boat. As the two boats, as our actions and beliefs, drift further apart, we get increasingly more uncomfortable. When we have unresolved gaps between our thoughts and actions. we feel intensely uncomfortable.

You can do all the coping and meditation and self-care you can handle, but if you don’t figure out cognitive dissonance, you’re not going to feel good. There is no substitute for integrity when it comes to peace of mind.

For example: Jennie knows that she should exercise more. It’s not that she’s obese or anything, but her body feels slow and sluggish, and she gets out of breath walking up a flight of stairs. She knows that she would feel better if she worked out. Each day that she doesn’t exercise, she feels a little tinge of disappointment and guilt.

How Does Dissonance Affect Us?

Dissonance makes us feel unsettled, guilty, uncertain, fake, or bad about ourselves. And this feeling isn’t just in our minds; it creates measurable physical tension. And this isn’t a bad thing; discomfort can help us be motivated to change.

This is strongest when it has to do with a belief about ourselves. For example, the thought “I value kindness” paired with the action “I just punched someone in the face” is going to bring on some pretty strong feelings of regret, guilt, and disappointment.

When we resolve dissonance we can feel more peace, like ourselves more, and feel clarity.

The opposite of dissonance is Integrity. Integrity is not just about being honest with our words; integrity means that we line up our actions with our values.

Integrity is the path to positive self-worth, more peaceful emotions, and a successful, purposeful life. Integrity is about closing the gap between what we think and how we act. Resolving cognitive dissonance is essential to living a life of purpose, meaning, joy, and growth.

If you want to get better at feeling, and if you want to feel peaceful, then you need to learn what to do with those gaps in your life.

Write about one area in your life where your actions don’t line up with your beliefs/values/words. How does that affect you? How do you feel about yourself in regards to it?

It is essential to acknowledge and resolve these conflicts as much as possible. When they are just left to simmer, we are left feeling false, helpless, and insecure. When we develop integrity, we are simply lining up our actions with our beliefs and consistently acting on them. This leads to feeling secure, capable, and whole.

What Can We Do About Cognitive Dissonance?

There are three ways to resolve dissonance. Not all are equal.

1. Change Our Behavior to Line Up With Our Values

Whenever our values are positive and helpful, changing our behavior is usually the best way to close the gap. Let’s explore this with the Jennie example. It sounds so simple, but if she were to start finding a way to exercise a little bit each day, her feeling of dissonance would be replaced by a feeling of pride.

Seems basic enough. When we change our behaviors to line up with our values, the dissonance goes away. This works great with positive values. You don’t have to be perfect to be moving in a good direction; what matters most is that you’re putting in effort to live the way that you believe you should be.

2. Change Our Thinking to Line Up With Our Behavior

Sometimes our emotions are built on faulty beliefs. In that case we need to change our thinking to line up with our values and behaviors instead of changing our actions to try to reach some impossible goal. This is common with perfectionism, all-or-nothing thinking, and impossible expectations.

Now what if Jennie actually has an eating disorder. She’s already exercising three to four hours a day but “knows” that isn’t enough. “If I only worked out more I would like myself,” she thinks. “Why am I so lazy?” In this case, her distorted thinking has led to unrealistic standards for herself that aren’t healthy. What does she need to do to resolve her feelings of inadequacy?

She needs to change her thinking to line up with reality, place more value on health and moderation, improve her base of self-worth, and let go of perfectionistic standards that are keeping her sick and miserable. When she changes her thinking to line up with a healthier set of behaviors (like exercising 60 minutes a day), then she can feel more peace with her thoughts and actions.

This is the worst option for trying to resolve a gap. Justifying attempts to resolve the feeling of dissonance by numbing, blaming, avoiding, or excusing the fact that we have a gap.

Going back to the standing on two boats analogy, as the two boats separate, your legs begin to stretch apart and weaken.It becomes painful and harder to stand, but instead of climbing aboard one boat to relieve the pain, you pop a couple Tylenols instead. Your problem isn’t solved, but at least it doesn’t hurt as much. This is obviously a bad solution.

But despite the harm that justifying causes, research shows that it’s the most common way people respond when they do something wrong. Most of the time people change what they believe to fit their behaviors instead of the other way around.

So they say things like “No one will know,” “Everyone does it,” “It’s not that bad,” “She is worse than I am,” I’m not a bad person; I only stole this because I needed it more,” etc.

Some tips for avoiding justification are:

If Jennie (#1) were justifying her behavior of not working out to meet her values, she might start thinking “Well I just don’t have time to exercise” or “At least I’m not as fat as my sister” or “It’s not my fault I’m overweight; it’s my genes.” And she would use these as an excuse to quiet the guilt she feels about not living her values.

Now this sounds mean, but that’s because Justifying is mean. It’s a dirty lie we use to cover up our own emotions. And we secretly do it inside our heads all the time.

So Jennie really values being healthy, but when she doesn’t act in line with that value, she feels bad. Or Jennie (#2) might think “Well, I’m just a bad person who will never be enough” or “There’s a lot of people who work out more than I do, so I should totally be doing more.”

Each of these ways of justifying keep Jennie stuck in the same loop of believing she should exercise, not exercising, and trying not to notice it or feel bad about it.

Signs that you justify/rationalize include:

We usually don’t need reasons when we know we’re doing the right thing. I once heard a clinical psychologist whose responsibility was to determine whether inmates were not responsible for their crimes due to a mental inability to understand guilt, right, and wrong.

He said that the way he could tell was if they excused their actions, if they had reasons and rationalizations for why they did it. If they did, that indicated they had a sense of guilt that they understood enough to need to cover it up. The inmates who were actually innocent due to their inability wouldn’t need reasons or excuses for what they did; they just did it.

Justifying your own behavior usually leads to suffering. This type of mental purgatory often shows up as “shoulds,” as in “Well, I should be exercising more, but I just don’t have the time” or “I should be kinder, but he is such a jerk.”  “Shoulds” are one way we create our own suffering. Keep an eye out for my upcoming video on how to work with “shoulds.”

But when it comes to cognitive dissonance, it’s best to resolve it through really taking the time to clarify.

Take time regularly to do an inventory with yourself. Once a week or once a day or once a month, take a look at your life and check in: “Am I being the person I believe I should be?” And if not, try to be 1% better each day.

This is all about striving for integrity, working hard to have your actions line up with the kind of person that you want to be. Integrity is the source of self-respect and, in my opinion, essential for fighting depression and anxiety. But nobody’s perfect. I mess up all the time.

For me, this gap, the gap between what is right and what I do, the only way for me to resolve that is through the grace of God and trying hard every day to be humble, willing to change, and as brutally honest with myself as possible.

Check out the rest of the Emotions Processing Course below. 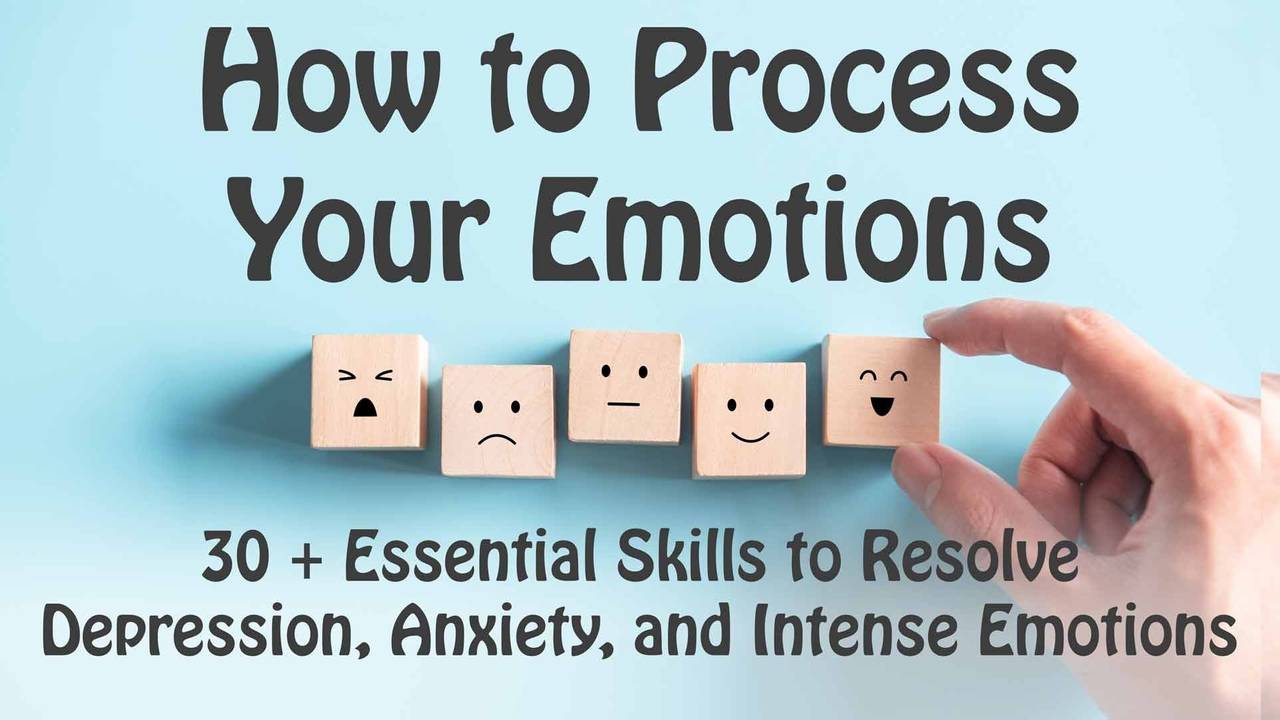