How to Set Better Goals with this One Shift in Thinking

You can learn to set better goals by understanding how your brain works.

Are you Accidentally setting Negative Goals?

I used to play soccer, a lot. I’m pretty sure I had a shirt that said “Soccer is life.” I was a midfielder, and I loved scoring goals. Whether you’ve played soccer or not, try to picture this. Imagine you’re a player, and you’ve got the ball. Obviously, you want to score. You’re dribbling at full speed down the field toward the goal. You pull a sweet spin move around that last defender leaving nothing between you and the goalie. Now, a soccer goal is pretty big, so there’s a lot of open space to get the ball into that net. But, as you’re flying full speed ahead, what would happen if you started to think, “Don’t kick it at the Goalie”, “Don’t kick it at the Goalie.” With that as your focus, where do you think the ball is going to go?
In most cases, you’d kick the ball right at the Goalie, because that is what you’re focused on. If instead of the goalie you aimed for the bottom left corner of the goal but were thinking “don’t hit the post!”, you’d probably hit the post. However, if you focus on the open space between the post and the goalie; if you stare intently at that piece of net that you want to hit; it will be much more likely that that ball will end up in the back of the goal net, and that will feel amazing!
So, with this story in mind, I want you to understand that “What you focus on” is essential in the process of setting and executing better goals. And I know what you’re thinking, “I know how to make and set goals, I write down and plan my goals all the time.” And that’s great. But we’re not talking about long term goal planning here. We’re not talking about what you have written down on paper. Like a player rushing towards the goal, We’re talking about how you mentally and emotionally react in the moment to a situation that’s providing an opportunity to reach your goal. Writing down goals and planning them out is pretty straight forward. Reacting at that moment, In the right way, to a situation that gives you the chance to work towards your goals is different and that’s the skill I’m hoping to teach you here.

How your Brain Works with Goals

Let’s look at two fairly standard goals most people have come across. Weight loss and being more social. These are pretty straight forward. They could sound something like, “I want to lose x number of pounds”, or I want to make x number of new friends. Now let’s look at two goal-oriented phrases that may occur while someone is working on these goals. Someone sitting at a dinner table in front of a delicious meal may say, “I want to eat less food”, or someone going to a new social event may say, “I want to be less anxious around new people”. You’ll notice the focus, the verb or action word of both of these sentences is “eat food” and “act anxious.” Neither goal provides an actionable step in the positive direction you wish to go in. The brain doesn’t really understand the word “no” or the negative concept of, “don’t do that”. The brain focuses on the overall action that’s being requested, regardless of its context.
You’ll see this a lot with little kids. If you tell a toddler “Don’t run” they don’t know what “don’t” means, but they do know what “run” means and so they run. If you say “don’t hit” all they can understand is the word “hit” and they have no idea what to do instead. You’ll notice in all these examples that the “Goal” is to remove something from the undesirable behavior instead of focusing it on a positive outcome.

Can you see the problem with a Negative Goal, where your focus is on subtracting something? For example, “I don’t want to feel sad”, “I don’t want to mess up” or, “I don’t want to yell at my kids.” The goal of not taking action is a very difficult one. Negative goals focus on not making mistakes by taking no action, and this is a big contributor to anxiety and depression.
And I’ve heard this type of goal called “dead people goals” because the only people who succeed at never feeling sad or never messing up are people who are dead. “You can’t cast out darkness with darkness-only with light”- Martin Luther King Jr.
So instead, you put your energy into what you want to achieve, not what you want to avoid. These are positive goals. Positive meaning- some action you can add that will move you towards your goals. A parent could say to a toddler that’s hitting, “be soft with your hands and go slow.” To someone feeling anxious about being social with a new group, they could say to themselves, “Just focus on smiling and say hello to two new people.” To someone looking to eat less, they could say, ” I’ll have two sips of water between each bite.” And to a soccer player looking to score a goal, you could say, “Aim for the net between the goalie and the post.”
Even better, identify the smallest possible steps to overcoming those negative “in the moment” goals. If you continually feel anxious about something, start by identifying what triggers your anxiety in those situations. That way you can start planning what action you will focus on and take during those moments instead of what you are trying to avoid. If you’re yelling at your kids, say to yourself, “I will identify my triggers for yelling. I will read 2 articles on conscious discipline to expand my parenting skills. I will ask my preschool teacher for tips.” Etc.
If you want to set better big goals, focus your attention and your words on what you want to achieve when you’re executing on those goals in those important moments. Focus on actionable steps that you are going to take to bring these things into your life, instead of what you’re not going to do (kick the ball to the Goalie), because of what you don’t want in your life. When you set a positive goal, that means you’re telling your brain what you do want to add to your life. When you do that, it gives your brain a chance to roll that idea around and it gives you the message of clear, actionable steps to make that idea a reality.
So what are your goals? share one in the comments below, I’d love to hear them. Choose one goal and use my free Habit Builder download below to help you track it and make it stick.
Thanks for watching, and take care.
Download Your Habit Builder
PrevPreviousHow to Stop Worrying about the Future
NextFight Depression And Burnout in 2 Minutes a Day – 3 Good Things ActivityNext 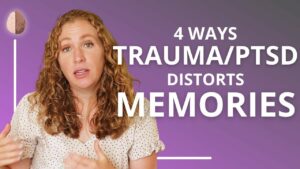 Why Are Traumatic Memories So Different From Other Memories? PTSD Memory 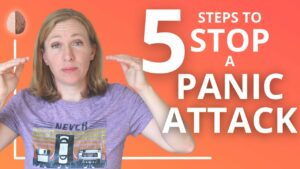 5 Steps to Stop a Panic Attack 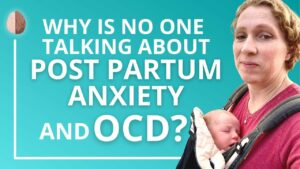 Postpartum anxiety is super duper common. About one in five women experience heightened anxiety to the point of distress postpartum, and it can make a

Catastrophizing: How to Stop Making Yourself Depressed and Anxious

Hi, everyone. I’m Emma McAdam. I’m a licensed marriage and family therapist. And in this post we’re going to talk about catastrophizing, which is expecting