How to Stop Depressive Rumination: Overthinking Part 3 Stop Dwelling on the Past

Depressive rumination is a type of overthinking where you create the habit of dwelling on the past. You rehash all of the terrible things you can think of over and over and over.

Depressive rumination says, “Oh, why is my life so awful?” or “Why am I such a failure? or “Why can’t I ever be happy?”

I had one 23-year-old client who we’ll call Ivan. His girlfriend broke up with him and he just kept dwelling on it over and over. Years later he’d say, “Why couldn’t I make that relationship work? Why couldn’t I be better? I’m never gonna find someone to love me. What’s the matter with me? Why am I such a screw-up?”

One of my other clients, Elena, constantly dwelt in the past. She’d say, “Why did I buy that car? I am such an idiot,” or she’d say, “Why am I so depressed?” and then she’d worry about it for hours every day for months.

But she didn’t just dwell in the past; she projected it into the future. So in session she’d say, “What if I never get better?” and then she’d analyze that.

Now, another type of rumination is dwelling on how you were mistreated. Maybe your dad shamed you when you came out to him as gay or your boss threw you under the bus at work or your lover ghosted you. And you spend hours of your day wondering why they did that, alternating between resentment towards them and wondering if it was your fault.

Rumination might also look like fantasizing about how your life could have been better if you had done things differently.

Why Do We Ruminate?

You might believe that thinking about your problems a lot may help you solve them, but here’s the thing: in the long run, rumination can make you pretty miserable.

In every quiet moment you find yourself drawn to dwelling on your mistakes, your failings, the disappointments, and the let-downs. And the more time you spend in those ruts, the deeper they get, and then pretty soon it feels like your whole world is dark. And not only do you feel depressed, discouraged, or hopeless, those dark thoughts start to feel like the truth.

Dwelling on depressive things becomes your new comfort zone, and being out of them feels awkward and weird, and hope and light just feel like some figments of some distant imagination.

But even though rumination makes you depressed and unmotivated, you keep doing it for some reason. Be honest with yourself; it rewards you. Maybe when you do it you feel like you’re righteously punishing yourself. Or maybe you feel like if you just think about the bad stuff more you could prevent it. Maybe it’s an attempt to regain control over something that you have no control over, which is the past.

Be honest with yourself for a minute. Do you feel a sense of pleasure in doing it for a moment? Do you get some validation wallowing in how bad you are or how bad someone else is? Doesn’t it feel just a little bit good to remind yourself that you’re a complete failure and there’s nothing you can do about it?

I get that this doesn’t work and it doesn’t feel good, but you have to admit it’s a little bit rewarding sometimes.

Now, once when I was in grad school, I’d been on a handful of dates with this guy, let’s call him Alexander, and then things didn’t go anywhere after that. And about six months later I’m visiting my parents on Christmas Day, and guess who knocks on the door? Alex.

Now, I had no idea he was coming, and I was pretty surprised to see him. My parents were wondering if there was something going on that they didn’t know about. It was kind of weird.

But we found a quiet place to catch up on life. And we talked for a bit, and he said, “You know, I really wish we had tried to see if this relationship would work.” He said, “I really regret that we didn’t keep dating.”

Now, just to clarify, I didn’t break up with him or anything. Like, we just were never exclusive. We just never took it any further. So I basically replied, “There’s no reason we can’t try dating again. We’re both single. I’m willing. Let’s give it a shot.” And then he got super awkward and said something about needing to go fix his car, and basically that was the end of it.

Now, for all I know he had a dozen reasons why he didn’t want to date me. Like, that’s cool, right? But if we take it at face value, what he said is the essence of depressive rumination. It’s this whole idea of thinking a lot about your regrets and then never doing anything about them when you do have the chance.

I don’t blame him; he was probably just still gaining those relationship skills like we all have to do in our life. But this concept of like, “I’m gonna think about and talk about all the things I regret but not do anything about them” prevented him from being able to connect on a deeper level or or form a more meaningful relationship. And I think this is the type of thinking that’s disordered.

But we at least have to get honest about the futility of thinking this way. We have to be honest that this type of thinking is self-deception. It’s distorted. Your thoughts are lying to you. They feel super real, but they’re lies. So these regrets and this distress, this feeling of “Oh, nothing is ever going to work,” it’s just not true.

The more you think about something, the deeper the grooves it creates in your brain, making it easier for you to think that way in the future. And if it’s negative or unhelpful thinking, then that’s a hard cycle to get out of.

How Can I Stop Ruminating?

So let’s talk about how to stop ruminating.

Let’s start by making these thoughts super obvious. You can’t change the things that you aren’t aware of. So it could help to ask someone to point out when you’re ruminating or to use a mindfulness timer, like Insight Timer app, to check in with your thoughts throughout the day.

Now that you’re noticing that you’re doing it, you can start to replace rumination with these five rules.

Rule number one is no “why” questions. Ask “what” questions instead.

So instead of Elena asking, “Why am I so depressed?” she can ask, “What is one small change that I can make to be healthier?” And she could choose to go for a short walk every day.

Instead of saying, “Why can’t I make a relationship work?” Ivan could say, “What’s one relationship skill I can learn?” And maybe he needs to learn to set boundaries.

Shifting from “why” to “what” can help convert rumination into action.

So Elena used to say, “I never make good purchases. I am such an idiot.” So these broad categorizations and labels of herself. Instead, choose one specific event, like, “I should not have bought the car from that dealer who pressured me. Next time I will go to a different dealer and take someone with me to help me not get pressured into a purchase.”

So just making it very specific about a single issue and a single solution.

With Ivan, instead of saying, “Why am I such a failure at relationships?” he could do the locus-of-control activity, which is where you explore what you’re responsible for and what you aren’t responsible for. By clarifying this he can see that he can’t force someone to love him; it’s not in his control whether someone chooses to stay. He can only work on himself.

So in this way you let go of the past, and you just focus on the small, tiny actions you can take.

Rule number three: no thinking without action. Take any situation that bugs you, identify what the value is, and then choose one action. So if you’re annoyed that someone was hurtful, you value being compassionate, act on that. If someone took advantage of you, you value good boundaries, act on that. This is all about being the change you wish to see in the world.

Instead of saying, “I’m such an idiot,” say, “I’m going to do this one thing different next time.” And this is all about changing the story that you tell yourself.

5. Counterbalance the Negative With Two Positives

Here’s rule number five: if you point out the negative, you must counterbalance it with at least two positives. The negative may be true, but your tendency is to just completely ignore the positive.

And I’m not talking here about toxic positivity where you’re not allowed to feel sadness. I’m talking about increasing your capacity to feel both sides of emotions, to see both sides of a situation.

So for example, if you messed up an assignment at work, you might have the thought, “Why am I so stupid? Why can’t I get anything right?” Here’s where you slow yourself down. You can’t get anything right. Are you sure? Yes, you did mess up on that assignment, but do you show up to work on time? Have you completed projects in the past?

So you could say something like, “I messed up on that project, and I’ve succeeded at projects in the past. I can learn from this experience to do better in the future.”

So there are five rules to stop rumination.

I know that when you’re deep in the throes of depression the darkest thoughts feel the truest, but they’re most likely lying to you. If you can, get some support from a wise friend or a mental health professional.

I hope this has been helpful for you. Take care.

Choose one of these to focus on and download my free habit builder to help you stop ruminating. 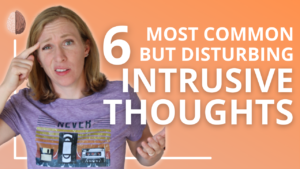 The 6 Most Common Types of Intrusive Thoughts 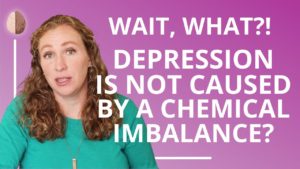 Depression Is Not Caused by a Chemical Imbalance

Depression is not caused by a chemical imbalance. That is the headline of the weekend. Or at least there’s no evidence backing the serotonin hypothesis 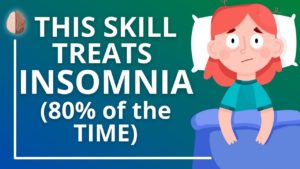 Hi, everyone. I’m Emma McAdam. I’m a licensed marriage and family therapist, and I make mental-health education videos. Today we’re going to talk about how 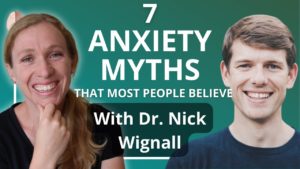 Hi, everyone. By the time you’re watching this I’ve got a new baby, so I’m not making videos for a bit. But one of my